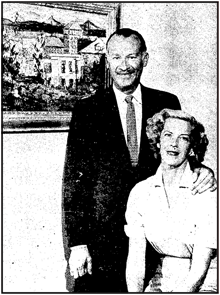 Every show opened with a ringing telephone and our lady PI answering it with "Candy Matson, YU 2-8209," then the organ swung into the theme song, "Candy".
Each job took Candy from her apartment on Telegraph Hill into some actual location in San Francisco. The writers (overseen by Monty) worked plenty of real Bay Area locations into every plot.

Candy was bright, tough & fearless. She used her pistol infrequently, but was unintimidated by bad guys, regardless of circumstances. Threats, assaults & even bullets, would usually produce a caustic (but clever) response for this blonde sleuth.

She and Mallard were frequently working the same case, but she usually solved it first. Old Time Radio experts generally agree: this show was the finest of all the female PIs. Although the show ran until May 1951, it never attracted a permanent sponsor (although the first season's final episode ended with the announcement that "Candy Matson Is San Francisco's Most Popular Program"). A total of 15 episodes (including the audition show and a revival) are currently in trading currency.
* Source: Thrilling Detective.com

Reviewer: harron68 - favoritefavoritefavoritefavorite - May 14, 2016
Subject: Candy Makes Fun
By today's standards it's not P.C. So what! Our standards will look wrong in 50 years too.
The short series was well scripted and acted. It's sad that more seasons of this independent female detective weren't made. With huge success of the "young girls'" detective, Nancy Drew, it makes no sense a female detective series for adults couldn't succeed. This series is a sweet treat, more so for being as brief as Candy's ...(insert un-P.C. joke here).

I must add this bit of trivia tho', and I'm not sure if he is on all the shows as I've yet to play them all, but the announcer Dudley Manlove, was the 'alien' captain in Ed Wood's infamously hilariously bad film 'Plan 9 from Outer Space' !!! He was of limited acting ability, tho' a fine announcer and commercial voice...and he is famously and magnificently bad in that '10 worst film' with many of his lines and how he delivered them classics still used today in smart phones and computers---find the wav files and the movie for an enjoyable hoot.

But he had a long successful career and should be honored for that...and is of course fine here as announcer. Just thought some of you might like another reason to listen and enjoy these shows!

Wouldn't it be wonderful if all of our favourite radio shows took over "present-time" radioland for just one week; I am sure we would have alot more people searching online for these wonderful programs!!

Thank you for the great reviews - today and previously!

Reviewer: PDGazette - favoritefavoritefavoritefavorite - August 7, 2011
Subject: Natalie Masters rocks!
http://radiogoldindex.com/cgi-local/p4.cgi?ArtistName=Masters,%20Natalie&ArtistNumber=31225
Radio GoldIndex sez there are 45 performances by Ms Masters available on various OTR shows, mainly Candy Matson and Fibber McGee eps of the mid-50's. One of the four or five Dragnet shows she did is in the Archive here:
http://www.archive.org/details/DragnetTheBigWar

I love all of these episodes of Candy Matson and wish there were more. Way ahead of its time with a smart female lead and a gay best friend.

I fell in love with the Series AND Candy almost 4 Decades ago when I used two of her programs on my syndicated OTR show "The Breakfast Serial": :The Fortune Teller" & "The Egyptian Amulet". To this day my opinion has never changed..."Candy Matson" is one of that small group of almost-independently produced Golden Age Radio Shows that many have NEVER EVEN HEARD OF, BUT SHOULD !

SPECIAL NOTE: A few years ago I was watching one of the early "Dragnet" TV Shows and had just taken my eyes off of the screen for a second when I heard a familiar voice coming out of my speakers. It was a woman talking to Joe Friday, she was a suspect in the case, and once she spoke her next line I IMMEDIATELY recognized the "voice" of "Candy Matson" !

It was Natalie Masters on the screen, and although the voice was still extremely appealing, she didn't quite look like Candy did. Nevertheless, it was just GREAT to see the "woman behind the voice" of one of Radiodoms only female detectives: "Candy Matson, Private Eye" !

Listen to these and enjoy a trip to the Golden Age Of Radio when, though it was on its downward spin due to TV,it still had some life left in it during this very cool Series' short but important run.